About the Portsmouth Branch Library

The Portsmouth Library began operations on December 15, 1961 in a very small room situated at Borough’s Square. 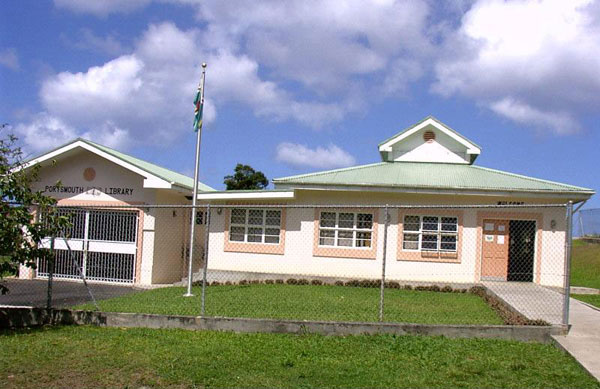 The collection was small, and seating accommodation was limited so that only a small number of people could use the library at any one time.   Opening hours were also limited, since the Library only opened on a part time basis.

A number of Library Assistants worked there, among them, Ms. Roma (Mary) Dupigny, before its closure in the 1980’s.

On August 6, 1984, a new Portsmouth Branch Library was opened on Pownall Street Lagoon, in the building which formerly served as a day care centre operated by CANSAVE. This was a vast improvement over what existed before.  The staff consisted of one library Assistant, Miss Rose Royer, and one cleaner/grounds man, Mr. Matthew Pierre.  Opening hours were from 10:00 a.m. 5:00 p.m. Mondays to Fridays and on Saturdays from 9:00 a.m – 1:00 pm.

In 1988 Ms. Royer left the service and was replaced by Ms. Monique Matthew who previously assisted when the Library Assistant went on vacation leave.   Mr. Pierre retired from the service in 2001.

The building at Pownall Street soon proved too small as the library served the two primary and two secondary schools in the town of Portsmouth. In the afternoons the building was bursting at its seams with students. The location did not provide space for expansion and so a next area was identified for the construction of a new library.

This new library which was funded through a World Bank project is situated on the south western end of the town on what was formerly part of the Portsmouth Secondary School playing field. This facility is much bigger and makes provision for an adult and a children’s section which are separated by shelving.  There is a computer section, kitchenette, office and technical services room.    There is also a garage for the mobile library vehicle which was commissioned when the new building was built.

The library, which was opened on September 22, 1999, also serves as the headquarters for the provision of library services in the north of the island.   Service is provided to and through the school libraries and the mobile library service.

The Portsmouth Library which has been in operation since August 24, 1984 is presently located adjacent to the Portsmouth Secondary School on Pownall Street (Gange Road). A newer building (opened in September 22, 1999) is located a few steps from the Youth Centre, it's previous location.

There, a wide range of services from book loans, Mobile Library Service to (wireless) printing is offered to patrons.